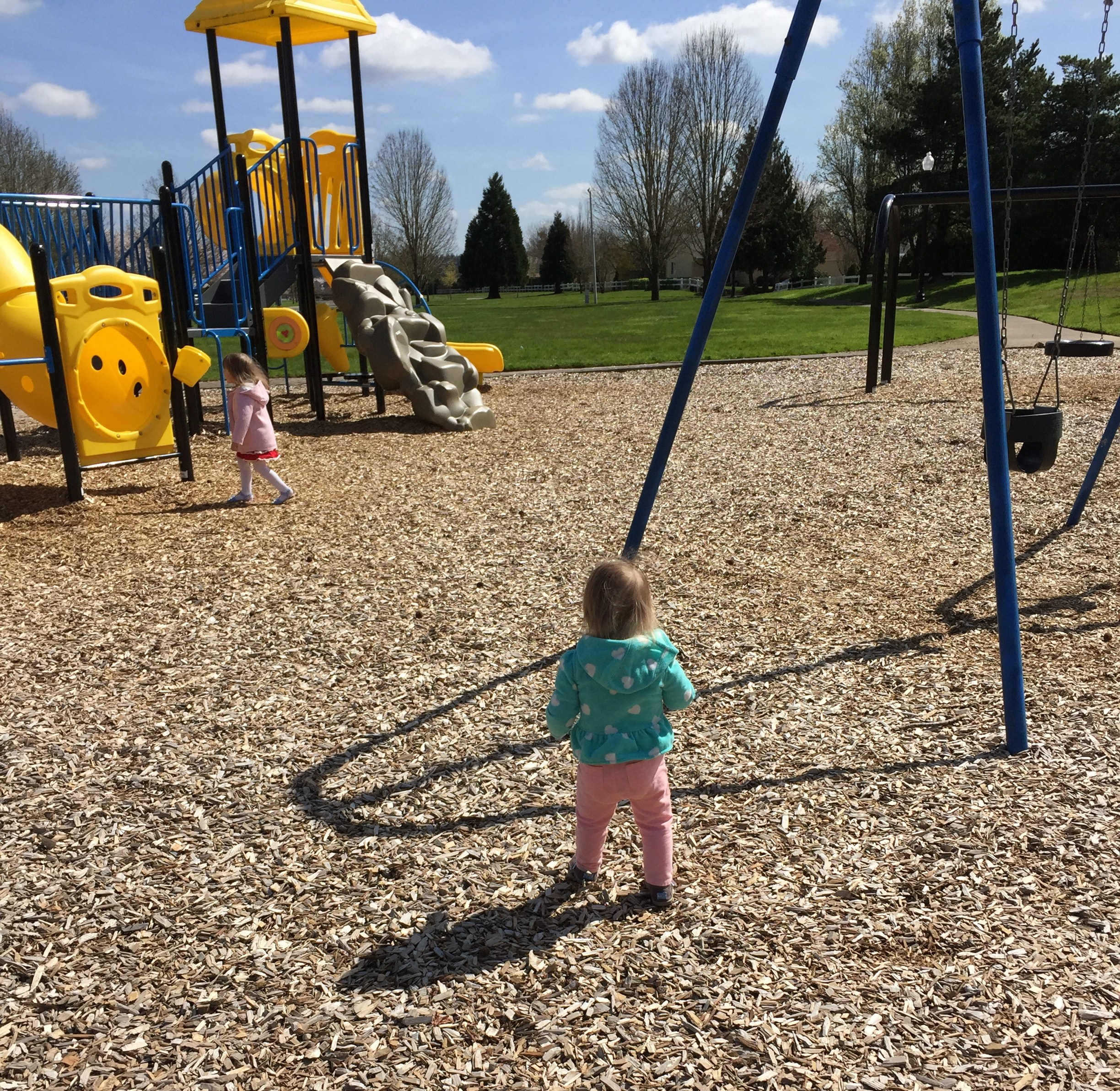 When I was six years old, I was a first-grader in Mrs. Stamets’ class. My closest friend in class was a petite spitfire named Danielle. She had flaming red hair chopped to her chin. I was timid, and she was bossy. We worked because she liked to take charge, and I would put up with her demands to have a playmate at recess.

Every girl in our class loved the swings. We’d race out at dismissal to snag the swings, and if we were too slow, we’d pace around kicking bark chips until one swing opened up. If rain fell at recess, we played hopscotch and jump rope on the covered porch. But, we always hoped for sun and swings.

On an early fall day, the sun broke through the gray clouds and dried up the playground just enough so we could play. We raced out, claimed swings and pumped our legs hard. As first graders, we tried our best to soar so high that we swung out to be perpendicular to the ground. We were too little, of course, to achieve our goal, but we tried our hardest and admired the bigger kids who succeeded.

Danielle and I finished our turns on the swings and took our place kicking at the bark dust. We kicked off the top layer of bark dust that had begun to dry and uncovered the soggy half-composted layers beneath. Danielle wore a brand new white sweatshirt that she had walked around and preened in all morning. She told all of us how lucky she was to have such a beautiful white sweatshirt.

We walked in front of the swings and miscalculated the distance. Danielle walked right in front of a dark haired little girl who swung out and kicked her down. We all stopped and rushed to help Danielle up, who had tears trailing down her face and the soggy, dark bark dust smeared down her white sweatshirt. As our teacher walked over to assess the situation, Danielle saw her sweatshirt, “My mom is going to be so mad at me!” She looked at me in panic.

Mrs. Stamets checked on Danielle and determined there was no permanent damage. Danielle and I pleaded with our teacher to be allowed to clean off her sweatshirt in the bathroom.

“She’s going to be in a lot of trouble! We have to clean her off!” I entreated.

“Go ahead,” Mrs. Stamets gestured to the bathrooms, “but go quickly. We need to get back into class.”

We nodded our heads sagely and walked into the bathrooms.

Danielle turned the water on full blast and began to pump feet long stretches of paper towels from their holders. “Help me get the back.” She shoved the fistful of flimsy brown towels at me. We soaked the towels in water and industrial hand soap and began to scrub. We only succeeded in rubbing the dirt farther into her sweatshirt.

We scrubbed. We got more paper towel wads. We piled on soap. We rinsed with water.

We heard older girls approach the door and Danielle pulled me into a stall and closed the door.

“We should go back now,” I whispered.

“We can’t. I’m not clean yet.” Danielle hissed.

We suppressed giggles as we waited for the older girls to finish in the bathroom. Soon, one of our classmates popped in, “You guys have to come back to class. Mrs. Stamets said so. She’s pretty mad at you.”

“We’ll be there soon.” Danielle smiled. Our classmate left, and Danielle turned to me, “We have to get this out!”

We unrolled more towels and rubbed harder. The trash can filled up. Other girls came in, looked at us while washing their hands at the sinks and walked out. I knew we needed to get to class, but I couldn’t let Danielle get in trouble with her mom either. Minutes later Mrs. Stamets stormed in.

“You girls need to get back to class right now.” She used her deepest, sternest teacher voice she could muster.

“You girls get in there right now, and you need to sit at the middle table at lunch.” Mrs. Stamets ushered us out of the class.

Every day for lunch we washed our hands in communal tubs of water, walked in straight lines and sat down at our assigned cafeteria table. We sat with classmates and ate peanut butter and jelly sandwiches and flat cafeteria hamburgers as the cafeteria monitors watched for unauthorized food swapping and rowdy behavior.

I couldn’t believe I had been banished to the middle table. I was a quiet kid who always followed the rules and never spoke out. In fact, I was known to have never once spoken to my kindergarten teacher. I was that shy.

At lunch that day, Mrs. Stamets marched our class into the cafeteria where Danielle and I were ushered to the middle table. I popped open my hard plastic My Little Pony lunchbox and ate quietly in shame.

I never once sat at that table again for the next four years at that school.

And it turns out, Danielle never got in too much trouble for her sweatshirt.