Be Strong and Courageous and Other Impossible Things

Be Strong and Courageous and Other Impossible Things 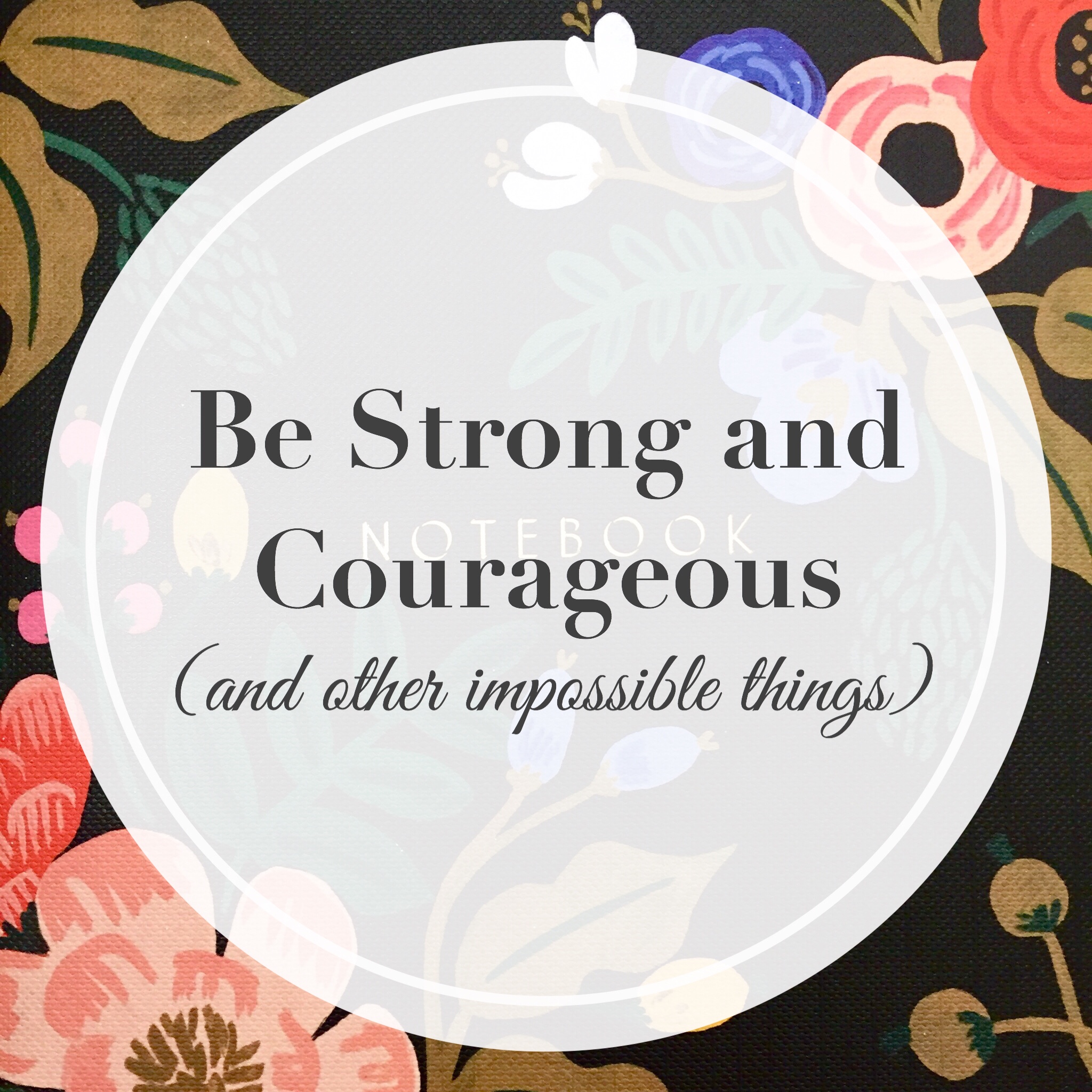 Have I not commanded you? Be strong and courageous! Do not tremble or be dismayed, for the LORD your God is with you wherever you go.

As a child, I was a performer, despite being so shy that my mom tells me I never spoke to my kindergarten teacher. But, I loved singing and acting. I was the first to volunteer for any church play or solo. I starred as Mary in a church program when I was nine and had several solos. I loved it.

But, as I got older, something crumbled in my confidence, that continued to crumble as the years went on. I still tried out for solos in middle school and landed a handful. I even tried out for a solo my freshman year of high school, but I didn’t get that one. By junior year, I was in my school’s large concert choir, but when it came time for our one-on-one midterms with the choir director I opened my mouth to sing, and all that came out was a squeak. (My choir director was not happy, and she told me in no uncertain words.) I managed to scrounge up enough courage to pass that midterm, and I somehow managed to slip into the audition-only chamber choir my senior year.

My writing never was affected in those years, just my ability to sing solos or play piano solos. But, when I entered college, my writing got hit too. (See previous posts on that.) By the end of college, I had lost all the confidence in the things I loved: singing, piano, and writing (only art managed to survive). I stopped singing solos, I stopped playing the piano in front of others, and I stopped writing altogether.

When I felt called back to writing, I honestly thought God was insane. I knew I loved creative writing, but I had been unable to write for years. Anything I had written creatively since college was hidden in journals and notebooks, and I definitely had no desire for people to read through those.

After feeling that call, it took a year of struggling with my writing and confidence before I really decided to step up and write, and it took another seven months after that before I got the idea for my story. Even as I started writing A Sacrificial Justice, I wasn’t ready to put my words in front of others. I still was raw and tender from my college years. I still believed the lies that I would never succeed with creative writing.

The craziest thing happened over the months of writing. I started seeing God’s hand in my writing journey. I started to write blog posts about how sermons fit in with my writing. It was as if God started turning on the lanterns lining my pathway.

In May, I stood up in front of hundreds of women and told them about my story and my book. I didn’t stand up because of a confidence in myself, I stood up in awe of what God had led me through so far. It was an amazing thing to acknowledge in front of all those women that it was God’s work in this and not my own.

Last night, I finished my first read through of my first draft. When I finished, I was beaming. I was crazy, stupid beaming at no one in the room, and I was giddy and excited. My book is good. I know that sounds crazy and cocky, but hear me out. I read through it, and I took notes on the flaws and the areas that need work, but overall my story flows and it has a theme and a purpose and characters that are developed. There aren’t major issues I’ve found to correct, which is absolutely insane!

I have had this amazing peace and confidence and excitement about this book. It wanes only when I take my eyes off the outcome and focus on the smaller aspects of the work of writing. And – this is one of the craziest statement of all – I have this deep-set confidence that this book will be published by a traditional publisher. I have an even crazier belief that it will get picked up by one of the big five of publishing, which I KNOW is crazy. I know it’s insane. I’m a no-name writer from Sherwood, OR. I don’t have much of a following. I have no connections to publishing. I have nothing that would lend my writing to even make it past the pile on an agent’s desk.

But, this is God we’re talking about.

In my Bible study this year, we’re studying Joshua. A few weeks ago we studied the Israelites crossing of the Jordan and the fall of Jericho.

Have I not commanded you? Be strong and courageous! Do not tremble or be dismayed, for the LORD your God is with you wherever you go.

In fact, God repeated “be strong and courageous” several times in the beginning of the book of Joshua. I can imagine God saying, “Joshua, be strong and courageous because what you’re about to do is terrifying, and the way I’m going to ask you to do this is crazy, but trust me. I’m going to tell you several times so you will remember. I will be there, and this will be for my Glory.”

I can also imagine Joshua saying to his armies, “Um, okay guys, I know this sounds totally crazy, but God wants us to attack Jericho by marching around it six times quietly, and…”

I mean, I’m paraphrasing. Joshua was much more confident than that in the Bible, but what God asked him to do was crazy by any human standards. And God’s “crazy” plans parted the Jordan River and caused the walls of Jericho to fall down. Can you imagine what would have happened if Joshua had said “you know what, God? My guys are going to think I’m crazy by telling them that. They’re going to think I’m insane trusting that this plan will work”? Think of all the miraculous things that happened then that never would have!

So, here I am, sitting here typing away on my laptop telling you that I, a first-time “nobody,” wrote a good book, and it will be published and well-received. You think I’m crazy (I still tell myself I’m crazy). And, if it was just me, I would be. But my ambitions for this book are not founded on my abilities and my talent, they are founded on His. And, if this book is part of His will, which I firmly believe it is, it will succeed in the way He has planned. I have no doubt of that.

After all, my God is the same God of Joshua who let Israel walk across the dry river bottom of the Jordan and made the walls of Jericho tumble down. What’s a published book compared to that?